3D
Scan The World
3,736 views 361 downloads
3 collections
Community Prints Add your picture
Be the first to share a picture of this printed object
0 comments

Hercules is the Roman name for the Greek divine hero Heracles, who was the son of God Zeus  and the mortal Alcmene. In classical mythology, Hercules is famous for his strength and for his numerous far-ranging adventures. The Romans adapted the Greek hero's iconography and myths for their literature and art under the name Hercules. In later Western art and literature and in popular culture, Hercules is more commonly used than Heracles as the name of the hero. Hercules was a multifaceted figure with contradictory characteristics, which enabled later artists and writers to pick and choose how to represent him.

Hercules is known for his many adventures, which took him to the far reaches of the Greco-Roman world. One cycle of these adventures becamecanonical as the "Twelve Labours," but the list has variations. One traditional order of the labours is found in the Bibliotheca as follows:

Thats why you can see on this sculpture, and in a wide variety of other pieces despicting Hercules, that he has the skin of a Lion being worn or besides him, which caracterizes him. He would own this skin after killing Nemean on hes first task. We may suggest that this sculpture represents the moment when this Hero  is preparing to battle the nine-headed Lernaean Hydra with a club, the second task. 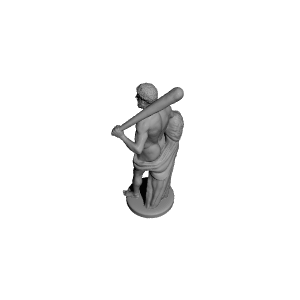 ×
3 collections where you can find Hercules in Brussels, Belgium by Scan The World