Hercules Killing the Hydra at The Louvre, Paris

3D
Scan The World
9,086 views 911 downloads
5 collections
Community Prints Add your picture
Be the first to share a picture of this printed object
0 comments

Hercules Killing the Hydra at The Louvre, Paris

The twelve labours of Hercules are a series of episodes concerning apenance carried out by Heracles, the greatest of the Greek heroes, whose name was later Romanised as Hercules. They were accomplished over 12 years at the service of King Eurystheus. The episodes were later connected by a continuous narrative. The establishment of a fixed cycle of twelve labours was attributed by the Greeks to an epic poem, now lost, written by Peisander, dated about 600 BC.

Driven mad by Hera, Hercules slew his six sons and his wife Megara. After recovering his sanity, Hercules deeply regretted his actions; he was purified by King Thespius, then traveled to Delphi to inquire how he could atone for his actions. Pythia, the Oracle of Delphi, advised him to go to Tiryns and serve his cousin King Eurystheus for twelve years, performing whatever labours Eurystheus might set him; in return, he would be rewarded with immortality. Hercules despaired at this, loathing to serve a man whom he knew to be far inferior to himself, yet fearing to oppose his father Zeus. Eventually, he placed himself at Eurystheus's disposal.

Eurystheus ordered Hercules to perform Twelve labours. Hercules accomplished these tasks, but Eurystheus refused to recognize two: the slaying of the Lernaean Hydra, as Hercules' nephew and charioteer Iolaus had helped him; and the cleansing of the Augeas, because Hercules accepted payment for the labour. Eurystheus set two more tasks (fetching the Golden Apples of Hesperides and capturing Cerberus), which Hercules also performed, bringing the total number of tasks to twelve.

The second labour was to slay the Lernaean Hydra, which Hera had raised just to slay Hercules. Upon reaching the swamp near Lake Lerna, where the Hydra dwelt, Hercules covered his mouth and nose with a cloth to protect himself from the poisonous fumes. He fired flaming arrows into the Hydra's lair, the spring of Amymone, a deep cave that it only came out of to terrorize neighboring villages.[6] He then confronted the Hydra, wielding a harvesting sickle (according to some early vase-paintings), a sword or his famed club. Ruck and Staples (1994: 170) have pointed out that the chthonic creature's reaction was botanical: upon cutting off each of its heads he found that two grew back, an expression of the hopelessness of such a struggle for any but the hero. The weakness of the Hydra was that only one of its heads was immortal.

The details of the struggle are explicit in the Bibliotheca (2.5.2): realizing that he could not defeat the Hydra in this way, Hercules called on his nephew Iolaus for help. His nephew then came upon the idea (possibly inspired by Athena) of using a firebrand to scorch the neck stumps after each decapitation. Hercules cut off each head and Iolaus cauterized the open stumps. Seeing that Hercules was winning the struggle, Hera sent a large crab to distract him. He crushed it under his mighty foot. He cut off the Hydra's one immortal head with a golden sword given to him by Athena. Hercules placed it under a great rock on the sacred way between Lerna and Elaius (Kerenyi 1959:144), and dipped his arrows in the Hydra's poisonous blood, and so his second task was complete. The alternative version of this myth is that after cutting off one head he then dipped his sword in it and used its venom to burn each head so it couldn't grow back. Hera, upset that Hercules had slain the beast she raised to kill him, placed it in the dark blue vault of the sky as the constellation Hydra. She then turned the crab into the constellation Cancer.

Hercules later used an arrow dipped in the Hydra's poisonous blood to kill the centaur Nessus; and Nessus's tainted blood was applied to the Tunic of Nessus, by which the centaur had his posthumous revenge. Both Strabo and Pausanias report that the stench of the river Anigrus in Elis, making all the fish of the river inedible, was reputed to be due to the Hydra's poison, washed from the arrows Hercules used on the centaur.

This bronze sculpure was originally held in the gardens of Rueil under the appointment of Louis XIV of Marly and Napoleon of Saint-Cloud. 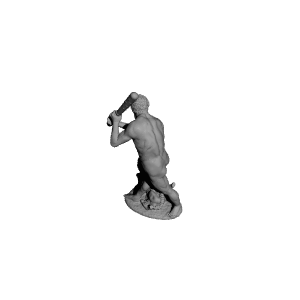 ×
5 collections where you can find Hercules Killing the Hydra at The Louvre, Paris by Scan The World