The AEC Routemaster aka London Bus is a front-engined double-decker bus that was designed by London Transport and built by the Associated Equipment Company (AEC) and Park Royal Vehicles. The first prototype was completed in September 1954 and the last one was delivered in 1968. The layout of the vehicle was conventional for the time, with a half-cab, front-mounted engine and open rear platform.

The first Routemasters entered service with London Transport in February 1956 and the last were withdrawn from regular service in December 2005. The first London bus route to be operated by the Routemaster was route 2, on 8 February 1956.

Note: Support at the nose will be enough. 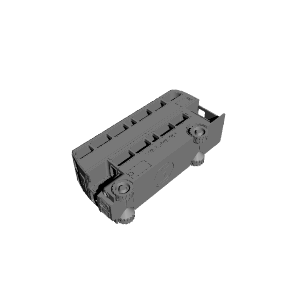