3D
360°
Scan The World
1,711 views 226 downloads
1 collection
Community Prints Add your picture
Be the first to share a picture of this printed object
0 comments

Amun the god of Thebes in Egypt was assimilated with solar divinities. The ram was sacred to him and in Greco-Roman representations, he is depicted with curved horns on either side of the head. He was especially worshipped as he who dispels every evil, drives out sickness, and saved the shipwrecked. In 332 BC Alexander the Great consulted his oracle in the temple of Siwah before embarking on his conquest of Asia, thereby learning he was the son of this divinity. It appears that the image of Zeus Amun was constantly represented in the form of a herm, of which the exemplar from Herculaneum is a copy made from a prototype of the mid fifth century BC. 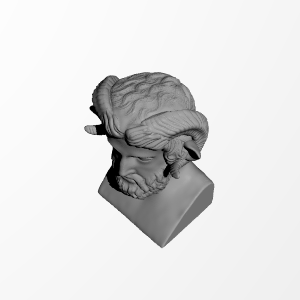