3D
Scan The World
2,044 views 66 downloads
1 collection
Community Prints Add your picture
Be the first to share a picture of this printed object
0 comments

Hermes is an Olympian god in Greek religion and mythology, son of Zeus and the Pleiad Maia. He is second youngest of the Olympian gods, known for transitions and boundaries. He is quick and cunning, and moves freely between the worlds of the mortal and divine, as emissary and messenger of the gods, intercessor between mortals and the divine, and conductor of souls into the afterlife.

The Hellenistic period saw a great number of depictions of Hermes, often through the ruse of a celebrity of the time. By the 17th Century Hermes became a popular ornament or statue in gardens. Laurent Delvaux (Ghent, 1696 - Nivelles, February 24, 1778) was a French sculptor. Delvaux was a pupil of the Antwerp sculptor Pierre-Denis Plumier (1688-1721). In 1719 he moved with Plumier to London, where he worked with Pieter Scheemakers in Plumiers studio.

Their first job was a commissioned sculpture for John Sheffield, the 1st Duke of Buckingham and Normanby in Westminster Abbey (1721/22). They worked together from 1723 from their studio in Millbank (Westminster) to 1728 on the tombs of Westminster Abbey, monuments and garden ornaments. In 1928 Scheemakers and Delvaux traveled to Rome to study classical sculpture and become proficient in working with marble. Scheemakers returned to England in 1730, but Delvaux remained until 1732, after which he returned to Nivelles. Delvaux was supported by Charles of Lorraine, a renowned art lover who supported several young artists at the time. Delvaux died in 1778. Laurent Delvaux produced numerous works commissioned by abbeys and several European royal courts. Much of his work has been preserved and can still be visited, especially in monasteries and museums in Belgium. Gilles-Lambert Godecharle was a pupil of Delvaux. Source: Wikipedia

Parc de Bruxelles, also Brussels Park or Warandepark is a city park in the center of Brussels. Warandepark is approximately 13 hectares, symmetrically designed and is located between the rue Royale, rue de la Loi, Ducale and the Place des Palais. The park is situated right between the Royal Palace and the Palace of the Nation, where the Federal Parliament of Belgium resides. It is decorated with a large fountain, various busts and statues, neoclassical entrance gates and a bandstand. In the Royal Park are about sixty images of which the majority subjects drawn from the mythology of antiquity depict. Most of them are from elsewhere brought to the park, especially the old ducal Royal Park, the castle of Tervuren, where they were taken after the death of the architect Charles Alexander of Lorraine, Governor General of the Habsburg Netherlands, and the palace of the Princes of Thurn und Taxis. The images of the park have since been somewhat affected by war, vandalism and pollution. Most of them have therefore been replaced by copies. The most valuable original images are housed in the Royal Museums of Fine Arts of Belgium in Brussels and more damaged works and pieces of lesser quality found a place in the Maison du Roi Museum. Initially, the images painted gray or color of French stone. Only in 1921 were stripped under the new aesthetic ideas, the images of their painting. More info on nl.wikipedia.org/wiki/Warandepark 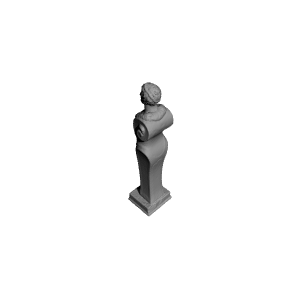 ×
1 collections where you can find Hermes by Scan The World