3D
Scan The World
3,337 views 199 downloads
1 collection
Community Prints Add your picture
Be the first to share a picture of this printed object
0 comments

The Hermes Ludovisi,also formerly known as Mercurio Oratore ("Mercury the Orator"), is a Hellenistic sculpture of the god Hermes in his form of Hermes Psychopompus. It is made of Italic marble and is a somewhat slick1st-century AD Roman copy after an inferred bronze original of the 5th century BC which is traditionally attributed to the young Phidias, circa 440 BC, or alternatively called "Myronic".It's model is among the earliest sculptural representations of Hermes as beardless and youthful.It was acquired by Cardinal Ludovico Ludovisi for the Ludovisi collection. 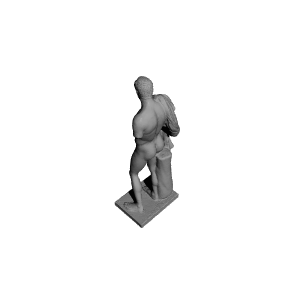 ×
1 collections where you can find Hermes (Mercury) at the Louvre museum, Paris by Scan The World