3D
Scan The World
2,742 views 76 downloads
Community Prints Add your picture
Be the first to share a picture of this printed object
0 comments

The hero Protesilaos, the first Greek warrior to land at Troy. Roman version of a Greek original dating to about 460-450 BC. Found at Kyzikos, north west Turkey.

The figure strides along a ship's prow. The head, now lost, was helmeted and the man held a spear in his raised right arm. There is a wound in his right arm pit, just visible at the point where the arm has broken off- a reminder that Protesilaos was killed as his feet touched Asiatic soil. 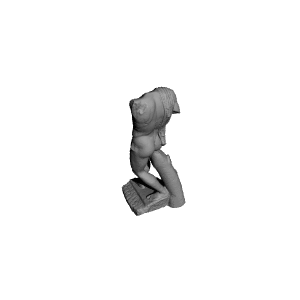 ×
0 collections where you can find Hero Peplipaos at The British Museum, London by Scan The World