3D
Scan The World
4,982 views 524 downloads
6 collections
Community Prints Add your picture
Be the first to share a picture of this printed object
0 comments

benjamin Spence was born in Liverpool , son of the locally based sculptor William Spence. He went to Rome in 1845 and remained there for the rest of his life. Spence's statue exploits the fashion in Victorian England for Scottish themes. The subject is an episode famous in the legend of Robert Burns, much painted in the period, though otherwise unknown in sculpture. Mary Campbell, the poet's belove, holds the Bible which Burns gave to her at their last parting. She was to die of a fever shortly afterwards. Spence executed at least five marble versions of Highlan Mary one of which was bought by Prince Albert in 1854 as a birthday present  for Queen Victoria. The present statue belonged to the Liverpool banking heri John Naylor, whose family Spence portrayed in two groups which are now at Sudley Art Gallery. 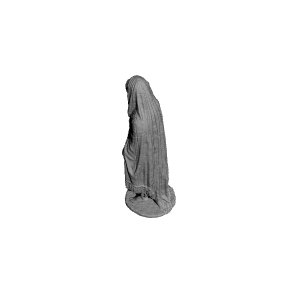