3D
Scan The World
6,078 views 343 downloads
8 collections
Community Prints Add your picture
Be the first to share a picture of this printed object
0 comments

Hit Bátorság Becsület Fény (Honour, Courage, Faith, Light) is a large group bronze sculpture adorning a fountain. It depicts four winged lions (who spout water into the fountain and are personifications of the title of the sculpture) who hold up a large copy of 'The Orb' one of the many Hungarian coronation jewels. The orb symbolizes the territory, the country and the grounds of the kingdom of Hungary.  On top of the orb shows the apostolic double-cross which was awarded by Pope Sylvester II. to Saint Stephen 1. in 1000 A.D. in recognition of his mission to turn the pagan Hungary to Christianity. 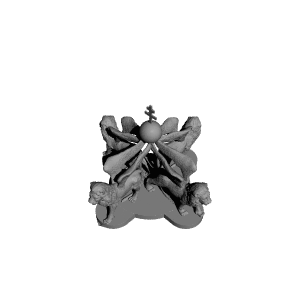 ×
8 collections where you can find Hit Bátorság Becsület Fény in Szeged, Hungary by Scan The World