3D
1,840 views 41 downloads
Community Prints Add your picture
Be the first to share a picture of this printed object
0 comments

The HJ-Y3 tricopter frame is quite nice. The two aspects I do not like is the placement of the landing gear and that there is no flat surface to attach a somewhat larger battery.
The landing gear is positioned to far to the front, which makes the tricopter tail heavy on landings. I moved the landing gear backwards 30 mm, which fixed the problem. This also made it possible to install a battery mounting plate that both provides a flat surface for the battery and room for two battery straps.

The battery plate is held in place by the straps themselves and does not require any drilling or modification of the frame. 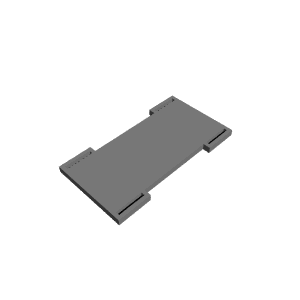