3D
Scan The World
2,052 views 139 downloads
1 collection
Community Prints Add your picture
Be the first to share a picture of this printed object
0 comments

Limestone seated figure of Horus wearing Roman military costume; traces of paint; arms lost. The figure originally wore a crown, probably of another material, inserted into the top of the head. The falcon head is rendered with careful attention to the feathering around the face; the eyes are human and the pupils are incised. The feathers of the falcon god double as the scales of a mail shirt (described by the modern term lorica plumata), the sleeves of which end below the shoulders. A knotted cingulum encircles the waist, dropping to the hips in contrast to the more typically depicted position at a soldier’s natural waist. A cloak fastened at the right shoulder by a round plate fibula is pushed back over the shoulders. A separate garment covers the legs. The attitude is one of casual repose, common to images of senior Graeco-Roman deities. 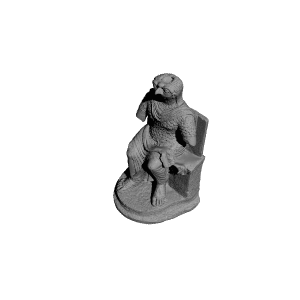 ×
1 collections where you can find Horus by Scan The World