3D
3,250 views 307 downloads
5 collections
Community Prints Add your picture
Be the first to share a picture of this printed object
0 comments

Look at that shiny magenta PETG!  If there's ever a filament I have to resist trying to eat, it's this one.  I'm convinced it smells like candy, too, but people tell me that's all in my head...

Anyway, what do we have here?  More math art, vase mode in particular.  This one's a labyrinthine profile lofted over a cosine curve.  Not the most complicated maze, but one suggestive of it, style-wise, and that's okay by me.  And yes, a cosine curve - there's something eternally cool about those familiar trigonometric curves that show up all over the place, so recognisable, even if we don't even consciously realise it at the time.

This one's done in OpenSCAD, using the same technique documented (along with code) in the Quadratic Vase, so go have a look there if you're curious how it's put together. 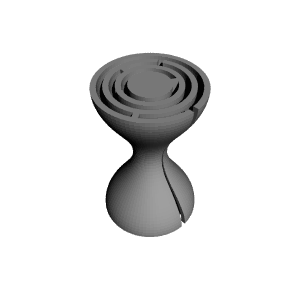 ×
5 collections where you can find Hourglass Maze Vase by Clockspring