3D
Scan The World
1,304 views 87 downloads
1 collection
Community Prints Add your picture
Be the first to share a picture of this printed object
0 comments

This storage vessel is one of an important group of hunting-scene hu. They show the influence of the nomadic art of China’s northern frontier. The four major bands depict men hunting birds, deer, boars, and tigers with spears, knives, and bows. Panels on the vessel’s shoulders show an archer shooting from the back of a four-horse chariot with a driver. These pictorial scenes of human activity represent a revolutionary departure in bronze art. Previously, during the Shang and Zhou periods, sacred symbols and stylized animals were formally arranged with regard to hierarchy and strict symmetry. The subject here appears secular rather than religious. 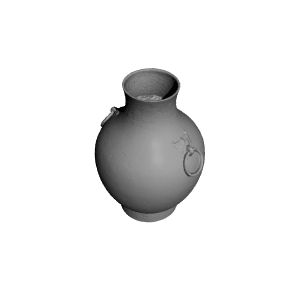 ×
1 collections where you can find Hu wine vessel by artsMIA