This is one of three other female Huaxtec deities currently on display at The British Museum in London. The female figures share similar characteristics, such as a rigid posture, hands over their stomachs, bare breasts, and usually wear a skirt and large headdress. The headdress is generally composed of a rectangular section with a conical cap on top and a fan-shaped crest, as shown on this sculpture.

These female deities are related to Tlazolteotl, an earth goddess also associated with filth and carnal sin. Her name comes from tlazolli, which means 'filth' in Nahuatl, the language of the Mexica (Aztecs), and teotl, a broad term for 'deity'. She was venerated by the Mexica, who conquered the Gulf Coast in the fifteenth century, during the reign of Motecuhzoma I (1440-69).

The Mexica king consecrated a new extension of the Templo Mayor (Great Temple) with a ceremony in which a large number of Huastec captives were sacrificed in honour of Xipe Totec, the god of fertility. Several gods revered by the Mexica were worshipped earlier in the Gulf Coast and other areas, and were added to the Mexica pantheon. 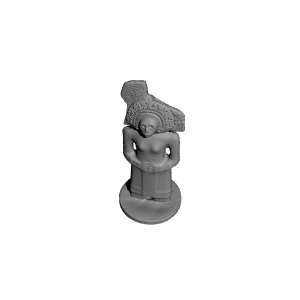 ×
0 collections where you can find Huaxtec female Deity at The British Museum, London by Scan The World
×
Louise Krasniewicz
@LouiseK
0
Printed on: MakerBot Replicator 2
Material: PLA
Posted at: 29th November 2022