3D
Scan The World
4,744 views 226 downloads
2 collections
Community Prints Add your picture
Be the first to share a picture of this printed object
0 comments

This Fountain has a sculpture of a Seagod. The water deity was in mythology associated with water or various bodies of water. Water deities are common in mythology and were usually more important among civilizations in which the sea or ocean, or a great river was more important. Another important focus of worship of water deities were springs or holy wells. A fountain is a piece of architecture which pours water into a basin or jets it into the air to supply drinking waterand/or for a decorative or dramatic effect. Fountains were originally purely functional, connected to springs or aqueducts and used to provide drinking water and water for bathing and washing to the residents of cities, towns and villages. Until the late 19th century most fountains operated by gravity, and needed a source of water higher than the fountain, such as a reservoir or aqueduct, to make the water flow or jet into the air.

In addition to providing drinking water, fountains were used for decoration and to celebrate their builders. Roman fountains were decorated with bronze or stone masks of animals or heroes. In the Middle Ages, Moorish and Muslim garden designers used fountains to create miniature versions of the gardens of paradise. King Louis XIV of France used fountains in the Gardens of Versailles to illustrate his power over nature. The baroque decorative fountains of Rome in the 17th and 18th centuries marked the arrival point of restored Roman aqueducts and glorified the Popes who built them. 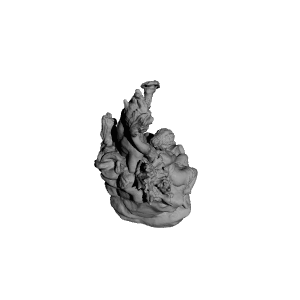 ×
2 collections where you can find Fountain with Sea Gods at The Fine Arts Museum in Brussels, Belgium by Scan The World