3D
Scan The World
3,296 views 111 downloads
1 collection
Community Prints Add your picture
Be the first to share a picture of this printed object
0 comments

This heavy wooden figure of from Mangareva, one of the Gambier Islands in the eastern Pacific Ocean. It is thought to represent Rongo, the god of agriculture, bringer of rain and plentiful breadfruit crops. Few such figures survived the destruction that marked the island's conversion to Christianity in the 1830s. The London Missionary Society began to work in Madagascar in 1818. However, Queen Ranavalona I was strongly opposed to this foreign presence. The missionaries abandoned their effort on the island in the 1830s, returning after her death in 1861. 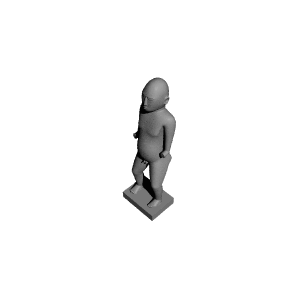 ×
1 collections where you can find Human Figure at The British Museum, London by Scan The World