3D
Support Free Scan The World
3,421 views 307 downloads
7 collections
Community Prints Add your picture
Be the first to share a picture of this printed object
0 comments

In architecture a corbel is a structural piece of stone, wood or metal jutting from a wall to carry a superincumbent weight, a type of bracket. A corbel is a solid piece of material in the wall, whereas a console is a piece applied to the structure. A piece of timber projecting in the same way was called a "tassel" or a "bragger" in the UK. The technique of corbelling, where rows of corbels deeply keyed inside a wall support a projecting wall or parapet, has been used since Neolithic, or New Stone Age, times. It is common in Medieval architecture and in the Scottish baronial style as well as in the vocabulary of classical architecture, such as the modillions of a Corinthian cornice, Hindu temple architecture and in ancient Chinese architecture.

The word "corbel" comes from Old French and derives from the Latin corbellus, a diminutive of corvus ("raven"), which refers to the beak-like appearance. Similarly, the French refer to a bracket-corbel, usually a load-bearing internal feature, as a corbeau ("crow"). 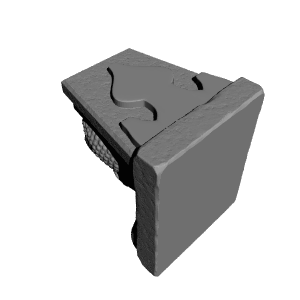 ×
7 collections where you can find Human Headed Corbel (1) at The Grand Curtius Liege, Belgium by IOxOI