3D
360°
2,396 views 21 downloads
Community Prints Add your picture
Be the first to share a picture of this printed object
0 comments

The first Humanoid Avian Cat was made using an ordinary cat with somewhat ordinary behaviors. This cat, named April, had been living for about twenty years doing practically nothing except defend the house from mice and be purry to her housefolk. April was surprisingly intelligent; it was as if she could understand housefolk words. She knew a simple housefolk language, but no one knew how she could understand them. She was black, yet she did not bring bad luck. She would also sleep, and leave her housefolk alone. What she was doing in her house was quite boring. She wanted to do something that would make her be remembered forever. Sure, there was the occasional Doritos chip April had managed to sneak, but those moments were rare.

It was the afternoon when the elderly black cat had a wander around the outside of the house. April vaguely knew where the vet was. She knew what it looked like, but her mind for directions was becoming slower with every passing day. April was wondering why she was thinking of all of this when she realized with a sudden jolt that the cat carrier was out. She groaned inwardly. April disliked the cat carrier, especially because of what it looked like.

The cat carrier appeared like a cage. Going into the cage made April feel trapped and helpless. She would meow but she never was let out until her housefolk reached wherever. But if she was going to get medicine to get better, she was going to have to go in, regardless of how she felt. The ride in what was called a car, was very rough, and a long journey. It always felt like that. Once she arrived at the vet, she was quite surprised.

This was not the vet. April did not panic, as she had traveled many miles by car. More miles than she could count. She had been to many places, some stranger than others. She was still in the carrier when her housefolk opened the strange door that looked like nothing she had seen. This door opened without any contact with the door. Once her housefolk were inside the strange building, the door shut behind the whole family. April’s housefolk carried her in the cat carrier up to the counter and set her down on the floor while her housefolk talked with some person behind the counter.

After around 15 minutes of patiently waiting, April was let out of her carrier. She was happy to have gotten out of that cage. She followed the person who had talked with her housefolk and was led into a strange room. She realized that this machine could be dangerous. April fluffed out her fur so she appeared twice as large in size. She was given some medicine, and then settled down for a nap, due to tiredness.

April awoke, and took a look around. She could see even better than she could a year ago. She was in a black box. She presumed she was in a test chamber, which made her have an unnerving feeling. She felt something weird on her back. Looking around, she noticed that she had a strange thing attached to her. April realized that she could control those things. They were black, just like she was. April suddenly remembered that she would see birds while looking out the window. They would fly away using wings that were about their size. With a jolt, she realized that she could potentially fly. She tried it out. With a shock, she flew up into the air. She landed on her backside, and felt plenty of pain. With an elderly grunt, she stood back up. Normally a cat who had managed to survive this long would not be able to get up this quickly. April realized that she had the stamina of a young, two-year-old cat. April tried sprinting from one end of the box to the other. To her great surprise, she was able to sprint quite quickly, despite a great wave of exhaustion hitting her. The elderly cat was able to stand on her hind paws only as well.

Later, April was let outside, wandering around back at home. She spotted a bird, dropped into a crouch, and tried to pounce on the bird. When she missed, she tried flying to take the bird down. To her surprise, she caught the bird before it could retreat back into its nest. April then brought the bird back to her housefolk. The housefolk disposed of it properly.

About three months later, April was given a job by the FBI: to rid all of the train stations in the state of mice, rats, pigeons, and other pests. She would receive loads of cat treats for clearing all of those annoying pests. She was swift going from one train station to another. Each time, she would take about half an hour to pest control the stations.

One day, about six moons into her job, she decided to read a newspaper. Reading it, she noticed that Concord had been infested with millions of rats. Right after reading about the rat infested city, she practically flew all the way into the rat-infested city of Concord.

As soon as she arrived, at least twenty rats challenged April. The rats were clearly taunting the elderly cat, but April hissed and sprang into action. She targeted the leader of the rats and managed to catch it. The other rats clearly were surprised, and those rats ran away from Concord. Moving forwards through the alleyways, she heard the sounds of cats and rats fighting. There were many cats, but the rats had at least ten times the number of cats.

When she arrived, she began slicing through rats, all claws unsheathed and teeth shown. Rats were now trying to target April, but she flew up into the air at least five hundred feet high with at least five hundred rats on her and shook them all off. All the rats fell to their doom, splatting against the pavement, some even knocking out their friends.

After about six hours, the rats seemed to back off. April was awarded with thousands of cat treats and her housefolk received four thousand dollars. 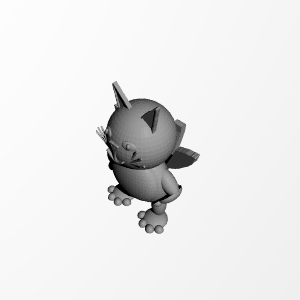 ×
0 collections where you can find Humanoid Avian Cat by Val1