I can't help the way I feel

3D
Scan The World
1,963 views 59 downloads
1 collection
Community Prints Add your picture
Be the first to share a picture of this printed object
0 comments

I can't help the way I feel

In this work lies an interest in a possibility of the emotional landscape of the body becoming manifest in its surface.

Visually, the way in which the flesh grows, erupts and engulfs the body can be seen as a metaphor of the way in which we become incapacitated by the emotional landscape in which we live and over which we have little control. The body also appears to be suffering from some kind of malignancy, as in cancer, but, for me, the image of the figure, coupled with the title, leads one into an open contemplation of the plight of the individual. 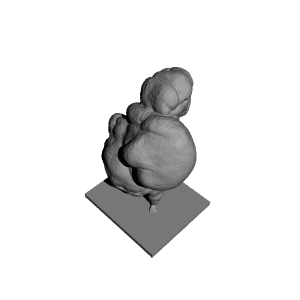