Icarus at The Petit Palais, Paris

3D
Scan The World
4,311 views 200 downloads
1 collection
Community Prints Add your picture
Be the first to share a picture of this printed object
0 comments

Icarus at The Petit Palais, Paris

This is a bronze sculpture by Paul Landowski (1875 - 1961) completed in 1947 depicting the story of The Fall of Icarus. In Greek mythology, Icarus is the son of the master craftsman Daedalus, the creator of the Labyrinth. Daedalus, a talented and remarkable Athenian craftsman, built the Labyrinth for King Minos of Crete near his palace at Knossos to imprison the Minotaur, a half-man, half-bull monster born of his wife and the Cretan bull. Minos imprisoned Daedalus himself in the labyrinth because he gave Minos's daughter, Ariadne, a clew (or ball of string) in order to help Theseus, the enemy of Minos, to survive the Labyrinth and defeat the Minotaur.

Daedalus fashioned two pairs of wings out of wax and feathers for himself and his son. Daedalus tried his wings first, but before taking off from the island, warned his son not to fly too close to the sun, nor too close to the sea, but to follow his path of flight. Overcome by the giddiness that flying lent him, Icarus soared into the sky, but in the process he came too close to the sun, which due to the heat melted the wax. Icarus kept flapping his wings but soon realized that he had no feathers left and that he was only flapping his bare arms, and so Icarus fell into the sea in the area which today bears his name, the Icarian Sea near Icaria, an island southwest of Samos.

Hellenistic writers give euhemerising variants in which the escape from Crete was actually by boat, provided by Pasiphaë, for which Daedalus invented the first sails, to outstrip Minos' pursuing galleys, and that Icarus fell overboard en route to Sicily and drowned. Heracles erected a tomb for him. 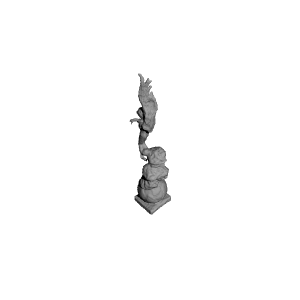 ×
1 collections where you can find Icarus at The Petit Palais, Paris by Scan The World