Idealised god or athlete at The British Museum, London

3D
Scan The World
2,818 views 108 downloads
Community Prints Add your picture
Be the first to share a picture of this printed object
0 comments

Idealised god or athlete at The British Museum, London

During the 4th century BC some artists began to inject more emotion into the facial features of male subjects. This head of a young god, perhaps Hermes, Hercules or an athlete, has a particularly sensitive expression, enhanced by the tilting of the head. Sculpture of the period is often marked by a real understanding of the relationship between skin, bone and muscle.

The head has been associated with the famous sculptor Praxiteles, but it is probably the produced of a later school of sculpture that was influenced by that great master. The drilled holes in the hair are from a metal wreath.

There are some support under the head and it should be clean gently otherwise it can be broken while it is cleaning. Enjoy your print. 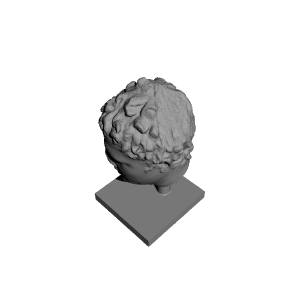 ×
0 collections where you can find Idealised god or athlete at The British Museum, London by Scan The World