3D
Scan The World
1,281 views 51 downloads
Community Prints Add your picture
Be the first to share a picture of this printed object
0 comments

Between 1955 and 1957 William Turnbull made a series of five similar free-standing sculptures titled Idol. Idol 2, cast in an edition of four, is the second in the series, and like the rest of the works is slightly smaller than the average height of an adult. In contrast to the Renaissance tradition, continued by such sculptors as Barbara Hepworth and Henry Moore, in which a sculpture fluently unfolds itself as the viewer walks around it, these flattened works, in common with Archaic Greek and Ancient Egyptian sculpture, are emphatically frontal. Patrick Elliott has suggested that this quality ensures that 'the work must be perceived instantly not read in time' (William Turnbull: Sculpture and Painting, p.34). 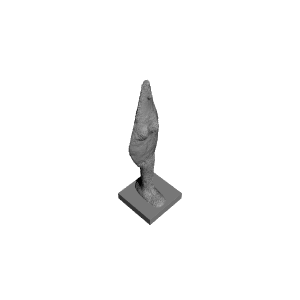