3D
Scan The World
5,041 views 612 downloads
2 collections
Community Prints Add your picture
Be the first to share a picture of this printed object
0 comments

This sculpture of the Ile-de-France was edited in bronze by Alexis Rudier and melted by Georges Rudier, in the garden of the Tuileries, Paris. Based on the original torso without arms or head of the Girl walking in the water created by Maillol between 1910 and 1921.
Inscription and signature on the basis : A. Maillol

The Tuileries Garden is a public garden located between the Louvre Museum and the Place de la Concorde in the 1st arrondissment of Paris. Created by Catherine de Medici as the garden of the Tuileries Palace in 1564, it was eventually opened to the public in 1667 and became a public park after the French Revolution. In the 19th and 20th centuries, it was the place where Parisians celebrated, met, strolled, and relaxed.

til the 1960s, almost all the sculpture in the garden dated to the 18th or 19th century. In 1964-65, Andre Malraux, the Minister of Culture for President Charles de Gaulle, removed the 19th-century statues which surrounded the Place du Carrousel and replaced them with contemporary sculptures by Aristide Maillol.

Also known as the Place du Carrousell, this part of the garden used to be enclosed by the two wings of the Louvre and by the Tuileries Palace. In the 18th century it was used as a parade ground for cavalry and other festivities. The central feature is the Arc de triomphe du Carrousel, built to celebrate the victories of Napoleon, with bas-relief sculptures of his battles by Jean Joseph Espercieux. The garden was remade in 1995 to showcase a collection of twenty-one statues by Aristide Maillol which had been put in the Tuileries in 1964. 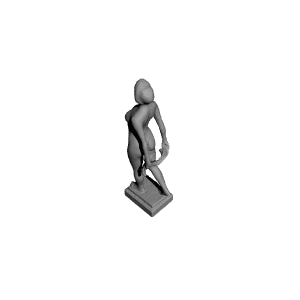