3D
Scan The World
2,634 views 98 downloads
Community Prints Add your picture
Be the first to share a picture of this printed object
0 comments

In Greek mythology, Niobe (/ˈnaɪ.ə.biː/; Greek: Νιόβη [ni.óbɛː]) was a daughter of Tantalus and of either Dione, the most frequently cited, or of Eurythemista or Euryanassa, and the sister of Pelops and Broteas.

Her father was the ruler of a city located near Manisa in today's Aegean Turkey that was called "Tantalis" or "the city of Tantalus", or "Sipylus". The city was located at the foot of Mount Sipylus and its ruins were reported to be still visible in the beginning of the 1st century AD, although few traces remain today. Pliny reports that Tantalis was destroyed by an earthquake and the city of Sipylus (Magnesia ad Sipylum) was built in its place.

Niobe's father is referred to as "Phrygian" and sometimes even as "King of Phrygia", although his city was located in the western extremity of Anatolia where Lydia was to emerge as a state before the beginning of the first millennium BC, and not in the traditional heartland of Phrygia, situated more inland. References to his son and Niobe's brother as "Pelops the Lydian" led some scholars to the conclusion that there would be good grounds for believing that she belonged to a primordial house of Lydia.

She was already mentioned in Homer's Iliad which relates her proud hubris, for which she was punished by Leto, who sent Apollo and Artemis to slay all of her children, after which her children lay unburied for nine days while she abstained from food. Once the gods interred them, she retreated to her native Sipylus, "where Nymphs dance around the River Acheloos, and although being a stone, she broods over the sorrows sent from the Gods". Later writers asserted that Niobe was wedded to Amphion, one of the twin founders of Thebes, where there was a single sanctuary where the twin founders were venerated, but in fact no shrine to Niobe.

Normal printing difficulty. Supports needed, some also to start at the actual object so I recommend using 'grid' and no 'lines'. 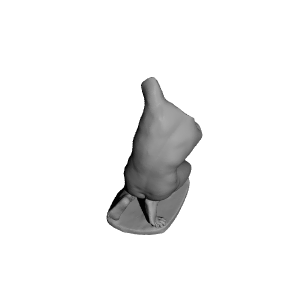 ×
0 collections where you can find Ilioneus, Son of Nioba by Scan The World