Injured Niobide at The Louvre, Paris

3D
Scan The World
5,032 views 519 downloads
3 collections
Community Prints Add your picture
Be the first to share a picture of this printed object
0 comments

Injured Niobide at The Louvre, Paris

In Greek mythology, the Niobids were the children of Amphionof Thebes and Niobe, slain by Apollo and Artemis because Niobe, born of the royal house of Phrygia, had boastfully compared the greater number of her own offspring with those of Leto, Apollo's and Artemis' mother: a classic example of hubris.

In another version of the myth, the Niobids are the children of Philottus and Niobe, daughter of Assaon. When Niobe dares to argue with Leto about the beauty of her children, Leto comes up with multi-stage punishment. First, Philottus is killed while hunting. Then, her father Assaon makes advances to his own daughter, which she refuses. He invites her children to a banquet and burns them all to death. As a result of these calamities, Niobe flings herself from a rock. Assaon, reflecting over his crimes, also killed himself. 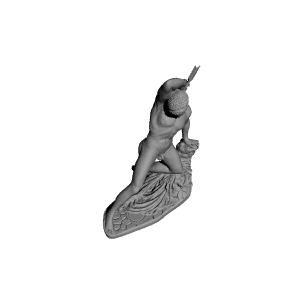 ×
3 collections where you can find Injured Niobide at The Louvre, Paris by Scan The World