3D
Featured Scan The World
1,983 views 90 downloads
Community Prints Add your picture
Be the first to share a picture of this printed object
0 comments

Count Ioannis Antonios Kapodistrias, sometimes anglicized as John Capodistrias, was a Greek statesman who served as the Foreign Minister of the Russian Empire and was one of the most distinguished politicians and diplomats of Europe. After a long and distinguished career in European politics and diplomacy he was elected as the first head of state of independent Greece (1827–31). He is considered a founder of the modern Greek state, and the architect of Greek independence.

The sculpture is the work of artist Michael Tobros. It was placed in Kapodistrias Square (named after Ioannis) in 1932. He is shown here standing, dressed in formal attire, leaning lightly on the trunk of a tree.

Born in Corfu in 1776, Ioannis Kapodistrias was the son of a noble family. He studied medicine in Italy, but was finally won over by politics and diplomacy. For many years he was at the forefront of European diplomacy, chiefly as the Russian Minister of the Exterior, during which time he was able to give timely assistance to the Greek struggle for indePentence.

In April 1827, the 3rd National Congress elected him as governor of the country for a period of 7 years, and he landed in Nauplion, the then capitol, on 8th January 1828. He governed the newly constituted Greek state for 3 years and 8 months, until 27th September 1831, when he was murdered outside the church of Aghios Spiridonas. 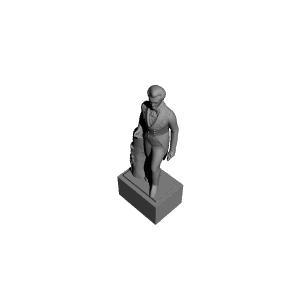 ×
0 collections where you can find Ioannis Kapodistrias by dimitrielgreco