3D
360°
2,698 views 143 downloads
3 collections
Community Prints Add your picture
Be the first to share a picture of this printed object
2 comments

This vase was designed as an entry to the SelfCAD / MyMiniFactory design competition.

The texture on this vase was actually drawn by hand with an ivy pattern drawn on a notecard with a sharpie. After I had drawn the pattern I had scanned the notecard and cleaned up the sketch in Photoshop before importing the picture to SelfCAD. After I had converted the image to 3D in SelfCAD I bent the side 180 degrees to form one half of the cylinder. After copying and rotating the side I merged the two sides to create the vase. I then tapered the top slightly.

Shown in the photos there is the handdrawing that was used to create the texture on the 3D printed vase.

This vase was originally printed in white PLA plastic and I had used an airbrush to paint the vase light blue.

This model does not require support material!

I also recorded a timelapse video of how I modeled this vase, please check it out on Youtube at: https://www.youtube.com/watch?v=eJdM0wbvBJ0&feature=youtu.be 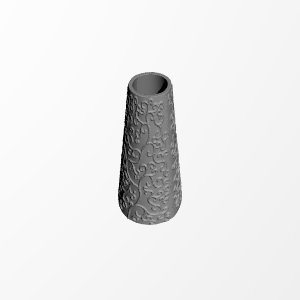 ×
3 collections where you can find Ivy Vase by areynolds15