Jacques de Wissant is one of the six burghers of Calais, accompanied by five other men including his brother Pierre de Wissant (also uploaded on the Scan The World archive). Jacques de Wissant’s hand is drawn back towards his face, implying doubt and questioning

Rodin worked on the hands of certain Burghers of Calais separately so as to heighten their power of expression. Although he used the same left and right hands for the two brothers, Pierre and Jacques de Wissant, the effect obtained on each figure was very different. Pierre de Wissant’s right hand sweeps the gesture upwards, as a sign of abnegation. Isolated from the figure, the hand forms a work in its own right, not just a mere study or fragment.

When Rodin decided to show it standing upright on a wooden plinth, he turned it into an independent exhibit, with a value all of its own. This is also the hand Rodin would use in The Hand of God , placing inside it the tiny figures of Adam and Eve who seem to emerge out of the dust. This work became the symbol of all creation. To quote George Bernard Shaw when discussing Rodin: “The Hand of God is his own hand.” 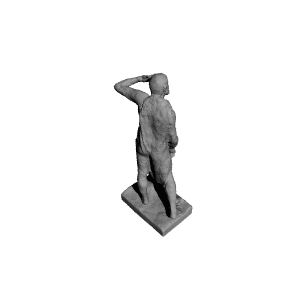