3D
Scan The World
2,920 views 89 downloads
Community Prints Add your picture
Be the first to share a picture of this printed object
0 comments

James Wolfe (1727-59) was a General. He was sent to capture Quebec and so to end French rule in Canada. Wolfe achieved success by discovering a steep unguarded patch which enabled him to land his troops unobserved; he led the attack on the Plains of Abraham above Quebec, but died of wounds before he could enter the city. This plaster cast by Joseph Wilton is posthumous; stated to be based on a servant of Lord Gower's who was very like Wolfe. Wilton found the hero's face 'too much distorted' when his coffin was opened at Portsmouth. 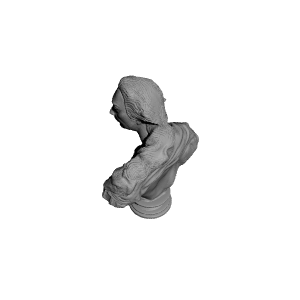 ×
0 collections where you can find James Wolf at The National Portrait Gallery, London by Scan The World