3D
Scan The World
2,029 views 54 downloads
Community Prints Add your picture
Be the first to share a picture of this printed object
0 comments

Sir Ferdinando Wainman, Master of the Ordnance (artillery and fortifications) at James Fort and an investor in the Virginia Company, was a knight who served in a high military position, being responsible for Jamestown's arms and armor. Wainman—born in 1576 in Oxfordshire, England, to an aristocratic family—was the first cousin of Thomas West, Lord De La Warr, the first governor of Virginia. Wainman arrived at James Fort with Lord De La Warr on June 10, 1610. Not long after their arrival, Wainman was appointed to his position as Master of the Ordnance, was placed in charge of the colony’s horse troops, and was named to the governing council. However, little is known about his time in Virginia.

This object originates from Smithsonian X 3D, made available under a Share Alike, Non-Commercial license. For more information and all educational resources surrounding this object please visit this link https://3d.si.edu . Please share photographs of your work with us below! 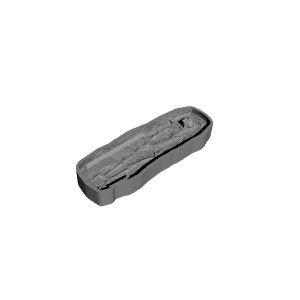