Jean d'Aire is one of the 6 Burghers of Calais. Rodin conceived the burghers less as ideally noble heroes than as ordinary men, ragged and emaciated after the ordeal of the siege, each experiencing a personal confrontation with death.

Jean d'Aire, his gaunt body visible through the sides of his shirt, stands upright as a pillar, with squared shoulders, massive clenched hands, and a stoically set jaw. In his bony face and sunken eyes one can read what his sacrifice is costing. In this model the man is nude, serving as an anatomical study for Rodin.

In 1347, nearly a year after Edward III of England began to besiege Calais, the city surrendered. The King agreed that six leading citizens should be handed over for execution to save the town from pillage. In The burghers of Calais Auguste Rodin shows the sacrificial victims, wearing sackcloth and with ropes around their necks, setting out to walk to the English camp.

Rodin’s heroes are not shown in the usual grandiose poses but caught in the middle of sometimes indeterminate gestures, appropriate to starving men struggling with their readiness to die. Eustache de Saint Pierre, the oldest, bends forward; Jean d’Aire grasps a huge key to the city, his legs apart and his head up, defiant; Andrieu d’Andres clutches his head in despair. Rodin did not want the figures to be placed upon a pedestal but fixed to the paving stones, so that passers-by could draw inspiration from them as they elbowed past.

In September 1884 Rodin was approached for the monument’s commission by the mayor of Calais and by November 1884 the artist had completed a maquette. Although the original plan was to represent only one of the burghers, Eustache de Saint Pierre, Rodin’s maquette showed all six burghers. 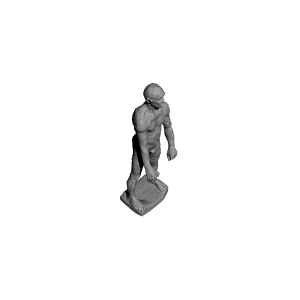