Jean de Fiennes, one of the 6 Burghers of Calais, was not identified in Jean Froissart's Chronicles and his name only came to light in 1863 when Baron Kervyn de Lettenhove published a manuscript found in the Vatican library naming Jean de Fiennes and Andrieu d'Andres as the two unknown burghers. The pose of Jean de Fiennes is little changed from the open-armed, slightly turning attitude established in the second maquette, and is carried through to the final figure with only small refinements. The Nude study of Jean de Fiennes in the Gallery's collection is the first in an edition of twelve and was cast by the Georges Rudier Foundry, Paris, in 1974 from the plaster in the Musée Rodin, Paris. 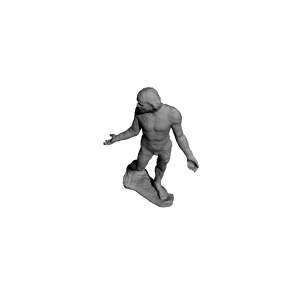