3D
360°
Scan The World
2,997 views 244 downloads
1 collection
Community Prints Add your picture
Be the first to share a picture of this printed object
0 comments

Famous for his sumptuous nude bacchantes, Carrier-Belleuse was also a brilliant portraitist. Of his historical portraits, the Rousseau is one of the most engaging, depicting the philosopher in a moment of introspection, admiring a flower. The present sculpture appears to be an original plaster sketch by Carrier, which is supported by interior metal struts only seen in X-Rays.

This is a sculpture of Jean-Jacques Rousseau, a Genevan philosopher, writer and composer. Born in Geneva, his political philosophy influenced the progress of the Enlightenment throughout Europe, as well as aspects of the French Revolution and the development of modern political and educational thought. Jean-Jacques depicted standing with a flower in his right hand. 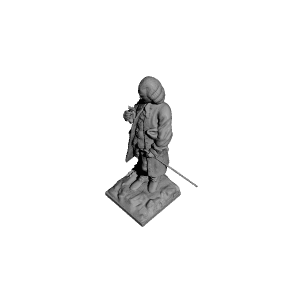