Jephthah's Daughter at The Art Institute of Chicago, Illinois

3D
Scan The World
4,423 views 197 downloads
Community Prints Add your picture
Be the first to share a picture of this printed object
0 comments

Jephthah's Daughter at The Art Institute of Chicago, Illinois

Jephtha's Daughter depicts a character from the Old Testament book of Judges. An Israelite leader engaged in war against Ammonites, Jephtha, promised that if God assured his victory, he would sacrificed whoever met him upon his return home from battle. Jephtha prevailed but when he arrived at his house, his only child, a virgin daughter, greeted him jubilantly. Here we see the young woman grieving over her imminent tragedy, her tambourine stilled and her head and shoulders drooping with weight of her knowledge. For audiences of the day, this work represented a form of tragic female bravery - an innocent victim, who was obedient, virginal and ultimately unrewarded..

Chauncey Bradley Ives (December 14, 1810 – 1894) was a prolific American sculptor who worked primarily in the Neo-classic style. His best known works are the marble statues of Jonathan Trumbull and Roger Sherman enshrined in the National Statuary Hall Collection.Ives was born in Hamden, Connecticut and at the age of 16 was apprenticed to Rodolphus Northrop, a woodcarver in nearbyNew Haven. He may also have studied with Hezekiah Augur, another local woodcarver who was a pioneer American marble carver. Shortly thereafter Ives turned to marble carving and began carving portraits, first in Boston, Massachusetts and then in New York City. Poor health (and, according to Craven, p. 235, perhaps too much competition from other sculptors in Boston and New York) eventually convinced Ives to move to Europe in 1844, where he ultimately settled in the expatriate artist community there. He was to remain in Italy, after moving to Rome in 1851 for the rest of his life. His final resting place is in the Protestant Cemetery, Rome in Rome. Ives' statue of Undine Receiving Her Soul, remains one of the icons of the American neo-classical movement, being selected to grace the front covers of at least three books about sculpture, American Sculpture at Yale University, Marble Queens and Captives and A Marble Quarry, where the back of the statue also serves as the book's back cover . Ives was to revisit the subject of Undine in another work, Undine Rising from the Fountain. Ives' reputation did not survive much longer than his life. Art historian and sculptor Lorado Taft includes him in Taft's seminal book The History of American Sculpture in a chapter entitled Some Minor Sculptors of the Early Years, and says of hisTrumbull and Sherman statues at the Connecticut State Capitol, "Descriptions of these curious works would be unprofitable. They fit in nicely with the majority of their companions, but of all the dead man there they seem the most conscious of being dead."  Unlike most of his other works The Willing Captive,(1886), while still designed to appeal to the 19th Century desire for sentimentality in art, contained more content than is typically found in art of that era. The work, subtitled An Historical Incident of November, 1764, depicts a real event that occurred during the French and Indian War in which a young woman is torn between the Natives that she has been living with after being captured by them and a white woman, her mother, who has come to take her back. The work now resided in Lincoln Park, Newark, New Jersey. 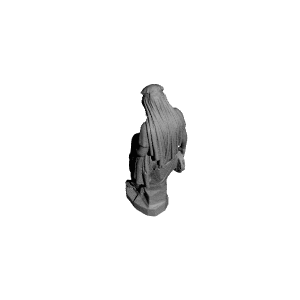 ×
0 collections where you can find Jephthah's Daughter at The Art Institute of Chicago, Illinois by Scan The World