3D
Scan The World
6,457 views 720 downloads
5 collections
Community Prints Add your picture
Be the first to share a picture of this printed object
0 comments

Enzo Plazzotta (May 29, 1921 – October 12, 1981) was an Italian-born British sculptor. Plazzotta was born in Mestre, near Venice, and spent his working life in London. He is best remembered for a fascination with and study of movement in bronze - the human form, horses, ballerinas, and for his female studies, many of which adorn London's streets. He died in London, aged 60.

The bronze sculpture, titled 'Jeté' (a term in ballet, from the French word 'to jump [forward]') is an intelligent piece depicting a jumping male ballerina, the flow of his waistband providing as the base for the seemingly weightless sculpture. It is believed to represent David Wall, CBE (15 March 1946 – 18 June 2013) an English ballet dancer, who, at the age of 21, became the youngest male Principal in the history of The Royal Ballet. 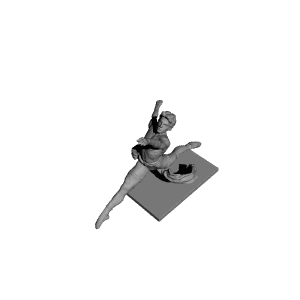 ×
5 collections where you can find Jeté, David Wall in Millbank, London by Scan The World