Joan of Arc at Domremy

Joan of Arc at Domremy

19th Century France venerated Joan of Arc, a historical heorine who fought against the English and featured heavily in the anti-British nationalist movement. Chapu as an artist was focused on naturalism, and presented not the warrior maiden but a shepherdess from Lorraine listening to the voices asking her to help the King.

The plaster cast presented at the last Salon under the second Empire was made into a marble statue in 1872. This was one of the most famous images of Joan of Arc in all of France, and was routinely circulated in a variety of materials so perfect for 3D printing! 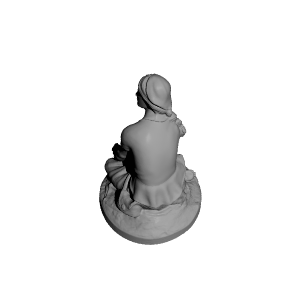