3D
Scan The World
2,767 views 244 downloads
1 collection
Community Prints Add your picture
Be the first to share a picture of this printed object
0 comments

Steven Hunter was commissioned by Barking and Dagenham Council to create a bronze statue of World War I soldier, Job Drain VC. It was unveiled before the local MP and Mayor on Armistice Day 2009.

Job Henry Charles Drain lived in Barking all his life and was awarded the Victoria Cross for bravery in World War I, when he was just 18 years old. Less than 1500 VCs have been awarded ever, and Drain received his after volunteering to assist his commanding officer in retrieving a much needed gun, despite it being 100 yards from the enemy position. 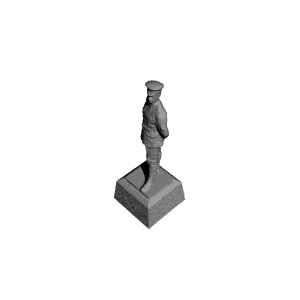