3D
Scan The World
2,382 views 227 downloads
1 collection
Community Prints Add your picture
Be the first to share a picture of this printed object
0 comments

Sir John Betjeman CBE (1906 – 1984) was an English poet, writer, and broadcaster who described himself in Who's Who as a "poet and hack". He was Poet Laureate of the United Kingdom from 1972 until his death.

He is considered instrumental in helping to save St Pancras railway station, London, and was commemorated when it became an international terminus for Eurostar in November 2007. He called the plan to demolish St Pancras a "criminal folly". About it he wrote, "What [the Londoner] sees in his mind's eye is that cluster of towers and pinnacles seen from Pentonville Hill and outlined against a foggy sunset, and the great arc of Barlow's train shed gaping to devour incoming engines, and the sudden burst of exuberant Gothic of the hotel seen from gloomy Judd Street."

On the reopening of St Pancras station in 2007, a statue of Betjeman was commissioned from curators Futurecity. A proposal by artist Martin Jennings was selected from a shortlist. The finished work was erected in the station at platform level, including a series of slate roundels depicting selections of Betjeman's writings. 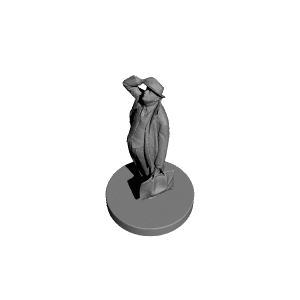 ×
1 collections where you can find John Betjeman at St Pancras Station station, London by Scan The World