3D
Scan The World
4,733 views 187 downloads
1 collection
Community Prints Add your picture
Be the first to share a picture of this printed object
0 comments

A memorial bust of John F. Kennedy stands on the Marylebone Road in London, England, to the west of Great Portland Street underground station. A work of the sculptor Jacques Lipchitz, it was unveiled on 15 May 1965 by the subject's brother, Robert F. Kennedy. The bronze bust is set on a pedestal of polished black granite.

This bust of President Kennedy by the American sculptor Jacques Lipchitz was unveiled on the 15th May 1965 by his brother Senator Robert Kennedy. This memorial was subscribed for by over 50,000 readers of the Sunday Telegraph in amounts limited to £1.

The bust is a unique cast, but another bust of Kennedy by Lipchitz was installed on 11 November 1965 in Military Park, Newark, New Jersey, United States. The bust was removed temporarily in August 2017 for repair after being vandalised.

I used the free MeshMixer software (http://www.meshmixer.com) to edit the file. I deleted surroundings, filled holes, modeled the bust a bit with brushes and remeshed the STL. 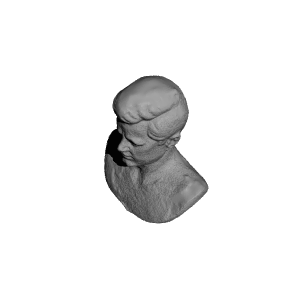 ×
1 collections where you can find John F. Kennedy Memorial by 3DWP