3D
Scan The World
5,942 views 273 downloads
1 collection
Community Prints Add your picture
Be the first to share a picture of this printed object
0 comments

The depicted John Jones bequeathed a large collection of mainly French 18th-century furniture to the Museum in 1882. He had been a sleeping partner since 1850 in a firm of military tailors, Rogers, John Jones Ltd, at 33 Bruton Street, London. As Jones died on 7 January 1882, this bust is almost certainly a posthumous commemorative portrait.

The bust and pedestal were originally at the premises of Rogers, John Jones Ltd. The vendor of the bust had been employed by the firm, and believed that it had been in the company's possession since 1882. The Museum used to own a plaster version of the bust (Mus. no. 12-1900), but this was sold to the present firm of Rogers, John Jones Ltd, 16 Clifford Street, London, in 1971.

John Lawlor initially studied at the Royal Dublin Society Schools; in 1845 he travelled to England and attended the Royal Academy Schools. His best known work is the group representing "Mechanics" which he executed in 1864 for the Albert Memorial. He travelled to America in 1886, returning to London in 1901. 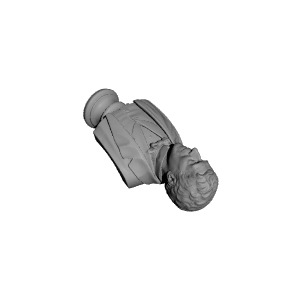 ×
1 collections where you can find John Jones by vam