3D
Scan The World
4,389 views 259 downloads
Community Prints Add your picture
Be the first to share a picture of this printed object
0 comments

John Muir (April 21, 1838 – December 24, 1914) was a Scottish-American naturalist, author, and early advocate of preservation of wilderness in the United States. His letters, essays, and books telling of his adventures in nature, especially in the Sierra Nevada mountains of California, have been read by millions. His activism helped to preserve the Yosemite Valley, Sequoia National Park and other wilderness areas. The Sierra Club, which he founded, is a prominent American conservation organization. The 211-mile (340 km) John Muir Trail, a hiking trail in the Sierra Nevada, was named in his honor.[2] Other such places include Muir Woods National Monument, Muir Beach, John Muir College, Mount Muir, Camp Muir and Muir Glacier.

In his later life, Muir devoted most of his time to the preservation of the Western forests. He petitioned the U.S. Congress for the National Park bill that was passed in 1890, establishing Yosemite and Sequoia National Parks. The spiritual quality and enthusiasm toward nature expressed in his writings inspired readers, including presidents and congressmen, to take action to help preserve large nature areas. He is today referred to as the "Father of the National Parks" and the National Park Service has produced a short documentary about his life.

This bust is in bronze, placed on a granite plinth, with a title plaque: JOHN MUIR 1838-1914. The back is inscribed RR HAMPTON III 1985.
The bust has been on display at John Muir's Birthplace in Dunbar, Scotland, awaiting re-development and re-opening in 2002. It is owned by East Lothian Museums Service.
John Muir was adopted by East Lothian Council as 'Man of the Millennium' in celebration of the year 2000. Photo copyright and provided here courtesy of the East Lothian Museums Service.

Many thanks to Javier for the beautiful renders of this sculpture! 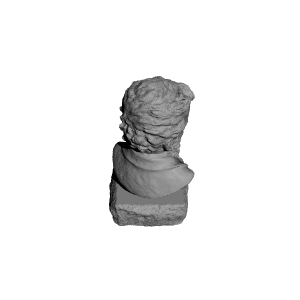 ×
0 collections where you can find John Muir at The East Lothian Museum Collection, Scotland by Scan The World