Joseph of Arimathea from the Mourning over the dead Christ

3D
Scan The World
4,255 views 119 downloads
3 collections
Community Prints Add your picture
Be the first to share a picture of this printed object
0 comments

Joseph of Arimathea from the Mourning over the dead Christ

This statue of Biblical character Joseph of Arimathea is part of a group of 7 statues entitled "The Mourning over the dead Christ", by Niccolò dell'Arca. This unknown Renaissance masterpiece is striking by both its realism and expressionism in the characters' features.

However, the character of Joseph of Arimathea distinguishes himself by his apparent absence of emotion. This is emphasized by his opposite position to Mary Magdalen who is the most impressive subject of the group.

Also, his clothing is an anachronism compared to the others: he looks like a typical man from the 15th century whereas the other characters are in 1st century clothing. This leads us to suggest he in fact portrays the commissionner of the group, represented as Joseph of Arimathea. This would also explain his absence of emotion, in order to preserve the resemblance and dignity with the contemporary person. Representing a commissionner in Biblical scenes or with Saints was a common custom all through the Middle Ages until Neoclassicism. 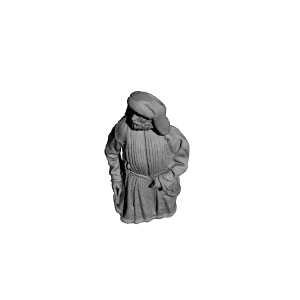