Juliette Récamier as Beatrice at The Musée des Beaux-Arts, Lyon

3D
Scan The World
2,794 views 112 downloads
Community Prints Add your picture
Be the first to share a picture of this printed object
0 comments

Juliette Récamier as Beatrice at The Musée des Beaux-Arts, Lyon

Jeanne-Françoise Julie Adélaïde Récamier (4 December 1777 – 11 May 1849), known as Juliette, was a French society leader, whose salon drew Parisians from the leading literary and political circles of the early 19th century.

Récamier had a personal relationship with Antonio Canova who, perhaps enamoured of her, offered her one of his works entitled 'The Three Graces' (also on Scan the World). Their relationship took a slight knock however when the artist presented Juliette with this sculptured bust of her, created from memory. Now known as "Juliette Récamier as Beatrice", Juliette was unable to see herself in the piece, and with good reason; the artist had idealised her, giving her a Greek profile. This slight blip was not enough to seriously damage their friendship.

Quite difficult print, supports are needed and many thin parts require a small nozzle. No rafts. 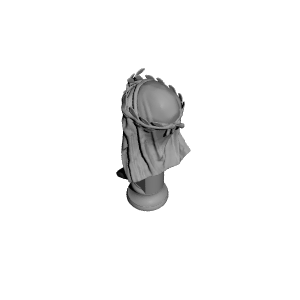 ×
0 collections where you can find Juliette Récamier as Beatrice at The Musée des Beaux-Arts, Lyon by Scan The World