3D
Scan The World
2,999 views 606 downloads
10 collections
Community Prints Add your picture
Be the first to share a picture of this printed object
0 comments

The great Roman general Julius Caesar is depicted wearing a laurel wreath, holding a staff and leaning on a shield. Initially instended for the park of Versailles, like its companion piece - Hannibal by Sebastien Slodtz on display next to it at the Louvre - this work evokes the military glory of the great generals of the ancient world and, symbolically, that of King Louis XIV. The small terracotta model for this sculpture is held in the louvre. 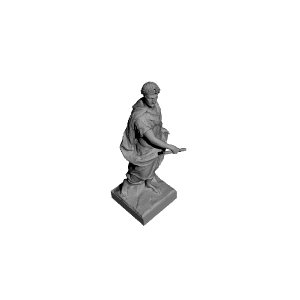