3D
Scan The World
4,439 views 273 downloads
2 collections
Community Prints Add your picture
Be the first to share a picture of this printed object
0 comments

This head, known in the past as Hera or Juno, was onece part of a colossal statue, three times normal size. The female portrait head, crowned with a diadem, a symbol of royalty and sanctity on the model of the Hera of Ephesus, was reproduced in 16th century paintings and in the following century was regarded as one of the most beautiful sculptures in the Ludovisi Collection.

The German literary traditioon of GOethe and Schiller admired teh Juno as the symbolic mage of German neoclassicism.

Most critical studies have identified this head as the young and idealised portrait of Antonia Minor, the emperor Claudius's mother, deified after her death in 37 AD. The most relevant iconographic comparison is the portrayal of Antonia on the Ara Pacis. Other theorists identify the sculpture as Livia, wife of teh Emperor Augustus. 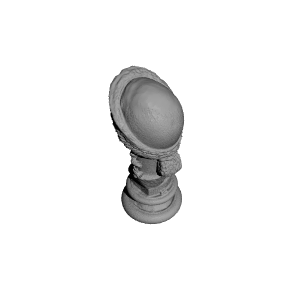