3D
Scan The World
2,462 views 139 downloads
1 collection
Community Prints Add your picture
Be the first to share a picture of this printed object
0 comments

The life-size bronze statue on more than 3 meters high bluestone pedestal located at north corner of Museum Square (Museumplein/Place du Musée) in Brussels depicts Prince Charles Alexander of Lorraine (1712–1780), a Lorraine-born Austrian general and soldier, field marshal of the Imperial Army and brother-in-law to Maria Theresa, Holy Roman empress. The statue comes from 1848 and its author is Louis Jehotte.

Charles was the son of Leopold Joseph, Duke of Lorraine and Élisabeth Charlotte d'Orléans. When his elder brother Francis Stephen, Duke of Lorraine, married the Archduchess Maria Theresa, daughter of Emperor Charles VI, Charles Alexander entered the Imperial service in 1737.

During the War of the Austrian Succession, he was one of the principal Austrian military commanders. He was most notable for his defeat by better trained and superior forces under the formidable Frederick the Great at the Battle of Chotusitz in 1742 and the Battle of Hohenfriedberg in 1745. He was also defeated by Maurice de Saxe at the Battle of Rocoux in 1746.

On 7 January 1744 he married Maria Theresa's only sister, Archduchess Maria Anna of Austria, thus making him doubly Maria Theresa's brother-in-law. The pair were jointly made Governors of the Austrian Netherlands.


Although Maria Anna died later the same year after marriage, Charles' popularity and lack of clear replacement allowed him to continue as governor and de facto sovereign until his own death in 1780.[citation needed] Charles also became Grand Master of the Teutonic Order in 1761.

With events including his brother François Stephen de Lorraine (Francis I, Holy Roman Emperor) taking the throne of the Holy Roman Empire and relinquishing the duchy Lorraine, the ducal title to the somewhat ambiguously ruled Lorraine passed to France, back to Charles nominally for a brief time, and back to France temporarily in 1766—all of which was later made moot by the French Revolution of 1789.

With the loss of his co-sovereign Maria Anna, his sister Anne Charlotte, whom he was very close to, acted as a de facto co-sovereign." 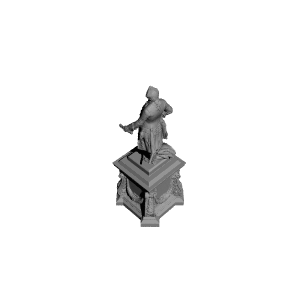