3D
Scan The World
2,517 views 177 downloads
Community Prints Add your picture
Be the first to share a picture of this printed object
0 comments

This is one of three bronze, life-size sculptures by artist Kevin Atherton completed and installed by Brixton station in 1986. Interested by the notion of 'love at first sight' and playing on the fleeting interactions that people often have with one another in large cities, he created these pieces to play on the idea of locking eyes before vanishing. The platform became the plinth for these sculptures and they were placed in looking distance of each other.

After spending some time stalking the platforms to observe how the passengers interacted with the space he found three models for his sculptures: Peter Lloyd (on playform one), Joy Battick (platform three) and Katin Heistermann (platform two). It has been claimed these these were the first bronze sculptures of black people in the UK. Atherton was intrigued by the idea that the bronze finish acted as a unifier, erasing superficial differences between the three, regardless of background. The everyday act of waiting for a train became the common denominator for Londoners from all walks of life.

The casting was done in sections in the ticket office, where Kevin made a plaster cast of their bodies then dressed them in actual clothes, stiffened with resin. Next the bronze was applied, in a layer only as thick as the clothing. 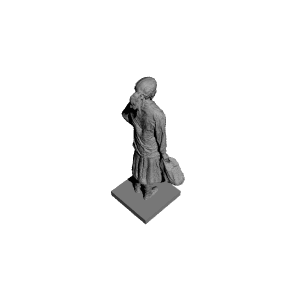 ×
0 collections where you can find Karin in Brixton Station, London by Scan The World