Karttikeya at The Art Institute of Chicago, Illinois

3D
Scan The World
5,686 views 647 downloads
1 collection
Community Prints Add your picture
Be the first to share a picture of this printed object
0 comments

Karttikeya at The Art Institute of Chicago, Illinois

Karttikeya, the god of war, is known by various names, including Skanda, Kumara, and Shanmukha, as well as Murugan in southern India, where he is very popular. This monumental granite sculpture is probably from the Madanapalle region of Andhra Pradesh. Carved in the round and riding a peacock, the commander of the gods is shown with six heads (shanmukha) and twelve arms, ten of which hold aloft weapons. The multiple arms and heads of Hindu deities usually denote their superhuman power. According to legend, Karttikeya was born from the split seed of the Hindu divinity Shiva. He developed his six heads in order to nurse from his six mothers, the Pleiades (or Krittikas- hence his name, Karttikeya), a constellation of stars. The complex accounts of his miraculous birth and heroic exploits indicate that his character combines several streams of folk belief. 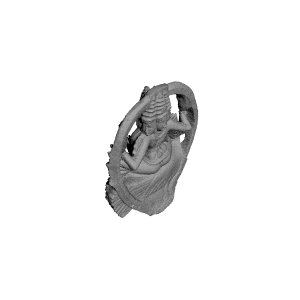 ×
1 collections where you can find Karttikeya at The Art Institute of Chicago, Illinois by Scan The World