3D
3,397 views 79 downloads
Community Prints Add your picture
Be the first to share a picture of this printed object
0 comments

The Kiev 10 was the first Soviet-built 35mm SLR with automatic exposure. It did this using an internal linkage for the body to control the lens aperture -- there is no aperture control ring on the lens. The same lens mount was used by the Kiev 15 TEE, but nothing else, and the internal aperture linkage makes adapting to another mount problematic.

In http://www.instructables.com/id/Using-Kiev-10Kiev-15-Lenses-On-Digital-Cameras/ , I showed a way to hack an adapter to provide a mount with an aperture control ring for Kiev 10/15 lenses, but it was awkward. Instead, the adapter shown here allows Kiev 10/15 lenses to mount and focus to infinity on standard Canon FL/FD/FDn body mounts while still providing aperture control using a less-than-20-degree twist of the lens in its mount.

Why bother? Well, Kiev 10/15 lenses are optically excellent while being smaller than their brothers in other mounts -- and often are available much more cheaply. With this adapter, you can even use Kiev 10/15 lenses on an FD Lens Turbo with your Sony NEX. Of course, this is a true adapter not a mount conversion, so you don't harm your potentially collectible Kiev 10/15 lenses by using it.

Be warned that this adapter does not lock, although the ones I've printed are all very firm fits. Use it at your own risk.

NOTE: if you are using this to mount on a Sony E-mount body, there is now a complete adapter for that posted as http://www.thingiverse.com/thing:1464062 .

There are overhangs in this print, and you'll probably have to use a pair of tweezers to remove a few dropped threads and work the part on an FL/FD flange a little to get things operating smoothly, but it's really not bad. There is an overhang to engage the Kiev 10/15 aperture tab, and that will also no doubt have some dropped threads too, but leaving that a little ragged just helps it engage the tab -- no harm done. A little filing to break the leading edges on the printed Kiev flanges may help it operate more smoothly.

Ours were printed on a MakerGear M2 in PLA with 0.25mm extrusion and between 20%-40% fill. Use a light-blocking filament -- ideally a black that gets its color from carbon black particles rather than dye, because most synthetic dyes are transparent in the NIR band, and camera sensors will record NIR.

There are two indented holes on the part: these show the start and end top positions for the FL/FD mount. I like to paint these red using a toothpick and a little red paint.

So, how does this work? Push the adapter on the FL/FD mount with the rightmost red dot at the top, then turn it right until the second red dot is at the top. Take the Kiev lens facing top up and turn it to the left until the first screw is facing up; push it into the adapter and turn it right until the top is up. The aperture lever should have engaged such that rotating the lens through about 20 degrees in the mount will open and close the aperture without dismounting the lens.

The photos show the Kiev 10/15->FL/FD adapter on a lens, the adapter mounting a lens on a Canon FTb body, and a photo taken with that lens using my FD Lens Turbo and Sony NEX-7. 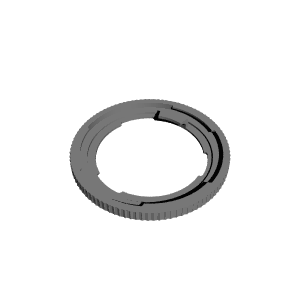