3D
Scan The World
2,986 views 277 downloads
1 collection
Community Prints Add your picture
Be the first to share a picture of this printed object
0 comments

George III by Matthew Cotes Wyatt (1777-1862). 1836. Bronze on a 12'-high Portland stone base. George III was "the first of England's monarchs to be commemorated in this way by public subscription, rather than by private gift" (Blackwood 48). The monument was originally intended to be much more splendid, depicting the king in a triumphal chariot drawn by four horses, but subscriptions proved inadequate. It was also intended for a different location — Waterloo Place, where it would have been much easier to appreciate, away from the traffic and the traffic lights that compete with it on this busy junction. But there was a different problem here. An item in Gentleman's Magazine explains that since the Duke of York (George III's second son, who died in 1827) was already commemorated at the front on a column there, this would have meant his back was turned on his father (see "Statue of King George III"). An alternative position was therefore found. Cockspur Street is nearby, at the east end of Pall Mall.

Wyatt was known for his equestrian sculpture, and the king's Arab horse, Adonis, looks suitably spirited, not unlike the coloured horse's head shown to some acclaim in Wyatt's recent exhibition, "his eyes flashing fire, his veins distended, his mouth half open" ("Mr Wyatt's Sculpture"), except that the model was reported to have flattened nostrils and ears in anticipation of the fray. The king's features, below his neat riding-wig, are certainly familiar — for example, from Johann Zoffany's famous portrait of George III. 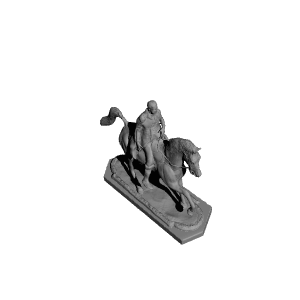